Clairemont Discount Moving Company has providing moving services to the community for over 20 years with licensed and professional Clairemont Mesa movers. The Clairemont moving company service areas include the Summit at Mission Bay, Vista Capri North Apartments, The Statton,  Archstone Presidio, Bluffs Apartments, Canyon Ridge, Mesa Village Apartments and many others. If you have a  home, an apartment, a condo or a small business in Clairemont Mesa, Discount Movers is here to help you.

Learn more about our Yelp Top rated San Diego movers and other nearby serving areas including Mission Beach and Mission Valley.

“Great service from our movers Arthur and Jamal! We moved from Mission Valley to Clairemont and our movers were very helpful and fast! This is our third move with Discount Movers as they do a great job!

“I have moved with Discount Movers four times. The guys were great! Joe, Justin and Brenden know what the “heck” they are doing!!!! I always highly recommend them to anyone, anytime as this is my THIRD move with Discount Movers. You have great guys that you should hang on to!”
Danny Jouanovic

Service Manager at an Auto Dealer

“Discount Movers did a FABULOUS job! Our movers (Joe, Kevin, and James) were very fast and efficient. Highly recommend!”

Attractions and Activities in Clairmont Mesa 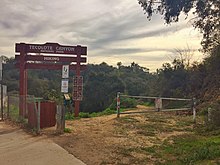 There are many public entrances into the Tecolote Canyon Natural Park. This image shows an entrance off of Genesee Ave.

Marian Bear Memorial Park – Also known as San Clemente Canyon, it was officially renamed to Marian Bear Memorial Park by the City of San Diego in 1960. Marian Park is roughly 467 acres and runs parallel to the south side of the 52 freeway. The main entrances to the park are off of Regents Road and Genesee Avenue. Both of these entrances provide public parking, restrooms and picnic benches.

YMCA’s Krause Family Skate & Bike Park – This destination park is affiliated with the Mission Valley YMCA but is located in the San Diego community of Clairemont Mesa at 3401 Clairemont Drive, San Diego, CA 92117. Skateboards, bikes, scooters, and inline skates are allowed. The large facility includes beginner, intermediate and advanced skate and BMX courses, a street area, mini ramps, a concrete pool, and the former Dew Tour vert ramp. In addition, the park houses the world’s first and only Skatercross track, completed in 2016. The park is open to visitors with paid daily or monthly passes. As of summer 2017, the park was undergoing renovations; with old ramps being torn down and replaced in anticipation of the 2017 Clash at Clairemont, an event sponsored by professional skater Andy Macdonald